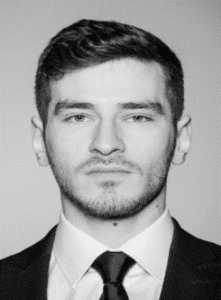 The British Law Centre (BLC) not only gives its student first-class education in both substantive law and legal skills but also presents them with a plethora of extracurricular activities – all of them truly extraordinary. I was fortunate enough to participate in a number of them, including at the Central & Eastern Europe Moot Court (CEEMC), as a team member in 2018 and as a coach in 2019, at the CEEMC’s 25th anniversary at the CJEU in Luxembourg. But what I’m writing about here is the mini-pupillage I undertook at the Blackstone Chambers in London.

Blackstone Chambers is one of the leading sets of barristers’ chambers in the Temple district of central London. It has over 100 tenants and over half of these are silks (QCs). If the language of “temples”, “sets”, “chambers” and “silks” is a little confusing, welcome to the wonderful world of the English Bar. Kieron Beal QC of Blackstone Chambers kindly arranged for a mini-pupillage to be offered especially to BLC students. I was delighted to win the competition and to be selected for this fantastic opportunity to experience first-hand life at one of the UK’s best barristers’ chambers. 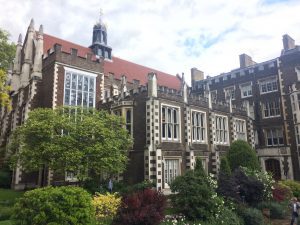 In May 2019 when I arrived in the Middle Temple, I was immediately struck by its architecture, beautiful gardens and the omnipresent legal atmosphere. Any initial concerns that I may have had disappeared at the moment when I entered Blackstone Chambers and was welcomed so warmly by Mrs Julia Hornor – the Chambers Director. Mrs Hornor invited me for a tour of the Blackstone’s premises, introduced me to the
clerks and staff and answered all my questions concerning the Chambers. Later that day, I met with Kieron Beal QC – my mini-pupillage supervisor – who explained what he was currently working on and asked if I would like to assist with some research and related written tasks. Later, Mr Beal took me to a conference with instructing solicitors where I was able to see how a trial strategy is developed from the earliest stages of a potential dispute. Even though I bombarded Mr Beal with numerous questions, he always found time to answer them and clarified all of my queries regarding the Chambers, the Bar, and the English legal system.

I spent the entire next day at the hearings in the Royal Courts of Justice together with Mr Iain Steele, also a barrister from Blackstone Chambers. The dust had barely settled from the previous day when I was struck again by beautifully old, wooden British courtrooms. Watching courtroom advocacy of London’s best barristers (and seeing them being grilled by the super-active judge) was the pinnacle of my mini-pupillage. I was truly impressed by the quality of their oral submissions, the way they presented th 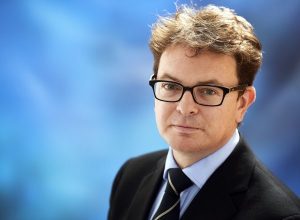 eir arguments and how they dealt with the judge’s legal doubts. I spent the first half of my last day at criminal law hearings, watching criminal barristers at work. Later, I again worked with Mr Beal. We discussed the case from the first day and I prepared bits of research to help out with legal analysis. I also went over the case files and familiarized myself with written submissions in a competition law case he had recently dealt with. Mr Beal was kind enough to assess the written work that I prepared for him and he also gave me valuable career advice. My stay at the Chambers ended with a farewell drinks reception where I had a chance to meet other barristers, the staff and clerks and to clarify my last remaining doubts as to their work and the career at the Bar.It was truly an unforgettable experience for a young Polish lawyer to sit in the Chambers and work directly with some of the world’s best barristers, discussing legal issues and watching their court advocacy. Studying at the British Law Centre gave me this unique chance to gain the first-hand experience of a barrister’s chambers and to see the highest echelons of the British Bar – and that is only one of many opportunities offered by the BLC. I highly recommend joining the BLC and completing its Diploma in English Law & Legal Skills!